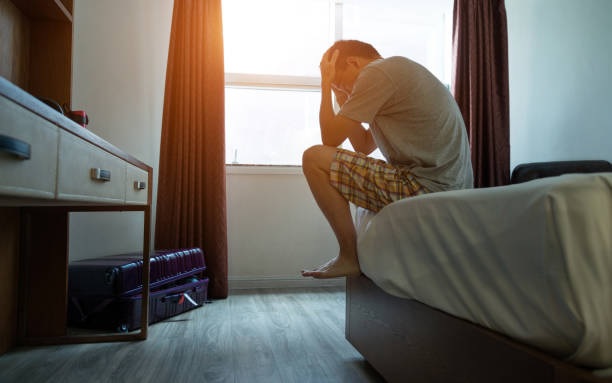 Diagnosed with obstructive sleep apnea after developing symptoms, Gabriel Lam first tried a CPAP machine to help him sleep before deciding to get surgery. The result gave him an energy boost and weight lost of 15kg.

‘I felt like a new man’ after the procedure, he says – he even lost 15kg without changing his exercise routine, after years of struggling to trim down.’

In 2015, Gabriel Lam noticed that he was waking up in the mornings feeling lethargic and more fatigued than usual during the day.
He wasn’t alarmed at first, but over the next couple of years, he started to experience abnormal breathing while asleep. In 2018, the 39-year-old father of three was diagnosed with obstructive sleep apnea, or OSA. “I was already a heavy snorer, but then my wife began to notice that I would sometimes gasp for air during the night,” says Lam, the chief operating officer of a moving company in Singapore.

“Worried about how my sleep issues and chronic lethargy were affecting my health and dumbfounded as to why I was gasping for air during my sleep, I sought medical help.”

After undergoing a sleep study, he was diagnosed with OSA

Lam was right to be concerned. OSA is a potentially dangerous condition that should be taken seriously, says Dr Annabelle Leong, a Singapore-based consultant ENT (ear, nose and throat) surgeon and head and neck surgeon. Abnormal breathing during sleep leads to episodes of airway collapse and obstruction throughout the night – resulting in persistent dips in blood oxygen levels.

“This represents a form of stress when you’re asleep, with impaired oxygen flow to your vital organs, especially your heart and brain,”

Among the most common warning signs of OSA are: persistent loud snoring; recurrent gasping or choking noises; waking episodes in the middle of the night; a feeling of not being able to breathe properly or the sensation of being suffocated; and restless sleep. Your sleep partner may also notice sudden pauses or silences in your breathing.

“Other symptoms of OSA may include daytime fatigue, memory and concentration lapses, micro-sleep episodes, mood swings, and morning headaches,”

Research shows sleep apnea affected individuals the most in China

Research published in 2019 in The Lancet Respiratory Medicine revealed that OSA currently affects 1 billion men and women between the ages of 30 and 69. The number of affected individuals is highest in China, followed by the United States, Brazil and India.

If undiagnosed or untreated, OSA may increase your risk of major health issues such as heart disease, high blood pressure, stroke, irregular heart rhythm (which may lead to sudden death during sleep), and dementia at an earlier age. OSA is also a cause of impotence or reduced libido in men.

OSA may affect a patient’s mental health, too, because the condition is associated with a higher risk of cognitive impairment and “brain fog” symptoms, and can trigger behavioural and attention-deficit problems.

People who are overweight or obese are more likely to develop OSA, and in fact, OSA is becoming more prevalent due to the global increase in obesity. But Leong points out that OSA may lead to weight gain, too. “It’s a chicken-and-egg situation. Usually, it’s the excess weight that makes OSA worse, but many studies suggest that poor sleep quality leads to an imbalance in the production of ghrelin and leptin during sleep.

“These hormones, which are released by the brain, control our appetite and metabolic rate, so if someone has OSA and isn’t getting quality sleep, it can be hard for them to lose excess weight, and in fact, it may cause them to gain weight more easily.”

Other high-risk groups include smokers and people who drink alcohol. The incidence of OSA also increases with age. And men more commonly suffer from the condition.

If you suffer from OSA, adopting healthier lifestyle habits can help. This includes stopping smoking and minimising your alcohol intake, and losing excess weight by eating a more balanced diet and exercising for at least 150 minutes a week. Excess weight was cited as a contributing factor to Lam’s OSA. He was also told that he had “soft tissues” blocking his airway.

Although he tried to shift the extra kilos by switching to a healthier diet and maintaining his exercise schedule of cycling two or three times a week and swimming once a week, he still struggled to trim down. As well as making lifestyle changes, people with OSA may opt for specific treatments. Leong prefers continuous positive airway pressure (CPAP) for patients who are obese or who suffer from severe OSA. This device uses a tube connected to a mask or nosepiece to deliver constant and steady air pressure to help patients breathe more easily while they sleep. However, this treatment may sometimes worsen nasal congestion as it can cause CPAP-related rhinitis, a condition in which the pressurised air irritates the soft tissue inside the nose, resulting in inflammatory swelling of the nasal lining.

Surgery for OSA is also an option, but it doesn’t work for everyone. Leong chooses her surgical candidates carefully – preferably those with a body mass index of 30 or less, with mild to moderate OSA, and who have other ear, nose or throat issues that require surgical treatment, such as a tonsil infection or chronic blocked nose problem, for instance. Another form of treatment is a mouthguard worn during the night: the mandibular advancement device. Leong says this works best for people whose airway obstruction is mainly due to their jaw or tongue falling backwards while they’re asleep.

“Now I have more energy, am able to concentrate better and enjoy more restful sleep”

After his diagnosis, Lam used a CPAP machine to help him fall asleep. Although it was uncomfortable – he had to sleep with a mask on his face and found it hard to get used to the machine-generated noise – it helped and he woke up in the mornings feeling refreshed. But in 2021, he once again noticed that he wasn’t getting quality sleep, and after consulting his doctor, he decided to get surgery. The surgery targeted two levels of Lam’s airway to improve the flow of air through his nasal airway and to widen the airway at the soft palate/throat level. The procedure was a success and Lam says that he’s never felt better. “The recovery period was long and challenging, but once I got through it, I felt like a new man. I stopped snoring and gasping for air at night and no longer felt fatigued during the day.

“Since the surgery I have also lost 15kg [33lb] without changing my exercise routine. Now I have more energy, am able to concentrate better and enjoy more restful sleep. To say that my life has improved is an understatement.”